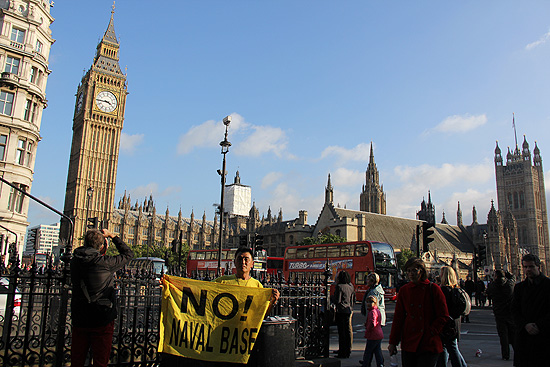 Kang Dong-kyun is the mayor of Gangjeong village on Jeju Island in South Korea where the government and the navy are currently in the process of building a new naval base. The villagers were not consulted before construction began and the project is still continuing in spite of daily protests from locals, religious groups, and international supporters including human rights and environmental organisations. Mr. Kang was arrested in 2011 for supposedly ‘obstructing business’ and detained for 90 days. Many other non-violent protesters in Gangjeong village have been put in prison by the police who are supporting the government and the construction companies rather than the local people. Recently, American film director Oliver Stone famously made a visit to Gangjeong to join in a huge peace march against the base. Many NGOs around the world are also interested in this issue. We feel that it might be of interest to AGI readers as well.

AGI: I heard that you’ve been on a trip to Ireland for the Dublin Platform before you came to London and you will be going to Paris next, is that right?

Kang: Yes, it has been a good experience for me. I met so many different people from different places. I felt like I was a toad in a well when I was in Jeju, but now after seeing so many people and hearing all their experiences and struggles, I think my eyes were widened.

AGI: Please tell us about why you are so strongly opposed to a naval base close to your village in Jeju?

Kang: From a wider view, I think the building of a naval base on Jeju Island has an impact on everyone in the world. But the issues immediately surrounding the Jeju villagers are slightly different. We have been struggling for 7 years altogether. Some people say ‘why are you against the government project itself?’. Of course, for national security or business, it may be necessary for them to do it. But if I define what national business or government is, I believe that it should be benefiting the people who are living there and raising happiness so they can live happily on their land. Any national project should be run not only by the government but also by the people living in the country. However, the Jeju naval base is being built in complete opposition to what I just described. So if you just look at the geographical location of South Korea it is very important, linking the land and the sea, and it is surrounded by superpowers like Japan, Russia, China and America. And our government says they need a naval base on Jeju Island to defend against those superpowers. But I believe this is not only for the South Korean government; the US is behind it and they want to oppose China which is growing fast. Jeju will become a sacrifice to the superpowers if there is ever any kind of war or conflicts in that region. So the building of a naval base on Jeju is not really for national security but in fact it raises tension between China and America and could cause some conflict more easily. That is the first reason why I am against the base.

The second reason has to do with the environment in Jeju. People say that the nature in Jeju was given to us by God. There are three different UNESCO World [Natural] Heritage sites on Jeju Island – the only place in the world to have that many. Last year, the IUCN [International Union for Conservation of Nature] conference was held there, and also Jeju was selected as one of the world’s ‘New 7 Wonders of Nature’ in 2011. The sea surrounding Jeju Island has also been designated as a conservation area by the Korean government. If they build a naval base there, it’s not going to end with that. If it expands, it will definitely have a great impact on the village which is only 100 meters away. They will need an air force to protect the navy. And for them to be protected, they will need an army. So they will destroy the natural environment, and it will be filled in with military-related sites. So we are against it for environmental reasons as well.

The third and most important thing is that currently the Korean government and military are talking about co-habiting with the local villagers and they are emphasising the development of the area through this construction project. But the government and navy are trying to oppress the local people and buy their land by force. Seven years ago, Gangjeong was one of the most peaceful villages in Jeju and there were no crimes in the village. But now so many crimes have been happening there. Approximately one person from every family is now a criminal. A lot of the villagers have left or will leave if this base is completed. It is affecting their livelihood because they rely on the land as farmers or on the sea as fishermen. So why are they building this naval base and for whom? That’s why we are opposing the construction.

AGI: How did the naval base project get started without the consent of the people of Gangjeong?

Kang: The project started seven years ago without us knowing. When the villagers found out, they formed a group against the project. I was the leader of that group. The naval base project was decided secretly by the government and the navy with the consent of the previous mayor of Gangjeong. So we voted for a loss of confidence in the last mayor (who was likely paid off by the government to agree with the construction) and his power was rescinded. Then the village community elected me as the new mayor. That was on the 11th of August, 2007. On the 20th of August, 95% of the villagers voted against the naval base. So that was the beginning of our struggle. Now there is about a 80/20 split between those who are against the naval base and those who support it. The supporters receive some kind of compensation from the government in order to try and convert the 80% who are still opposed to the base.

AGI: Have you tried to get any help from organisations such as the UN in regards to this problem?

Kang: Normally if you want to do any kind of major construction in South Korea, you need to get permission from the branch of the government which oversees the environment and culture. They have a lot of power under the law. However, in reality, they do not have any power in regards to business carried out by the government itself or the Ministry of Defence. We went to them and they said they have no power in this situation. UNESCO Korea said the same thing. The UN also has not helped. They only advised on human rights issues and they said we are doing well. But the UN cannot always be there to watch what is happening. Even though Ban Ki-moon [the head of the UN] is Korean, he cannot resolve issues in his own country. Personally, I think he should resign.

AGI: If you believe that the construction of the naval base will continue no matter what, and it is too late to stop it now, then what do you hope to gain from the government? Do you have any specific demands?

Kang: We don’t want anything from the government; we aren’t asking for anything from them. They keep talking about giving us some kind of monetary compensation, but I don’t want to be a slave to money. We just want them to do what is right. And in the future, they need to stop doing this kind of thing. That is why we keep fighting. We were given this land by our ancestors and I feel that we have a responsibility to pass it on to our descendants.

AGI: You are planning to make Gangjeong into a book village, correct? Can you tell us more about that?

Kang: After seven years of fighting, Gangjeong has become quite famous around the world. But we want to turn Gangjeong into a place where we can live peacefully, so we can call it a ‘peace village’. We are working on a project right now to bring a lot of books and make a book cafe.  We will put some bookcases around and under trees, to turn the village into a huge library itself. We are just in the first steps of doing this. Books are the food for your mind and they also can bring peace. We want to attract more people to visit the village, and this is one way to do that. Person-to-person exchanges are our goal. We are getting a lot of help from writers and poets who are supporting this project (as many as 400-500).

If you would like to learn more about this issue and see how you can help, please visit savejejunow.org.

We thank the mayor for taking time out of his tight schedule to meet with us for this exclusive interview ahead of his speech at the University of London. Thanks also to Layoung Jackson for interpreting.

No Woman, No Drive