This is a new column that intends to introduce Londoners and visitors to another side of this great city – the stories of its Asian communities and places of interest related to Asia in general. This week, AGI columnist Tim Holm takes a look at the South Asian community of Brick Lane.

Sometimes called ‘Banglatown’, Brick Lane is essentially one long street in East London close to Shoreditch and Spitalfields, but the name now encompasses the mostly Bangladeshi neighbourhood in the surrounding area. While it is true that Brick Lane contains more than a vibrant South Asian atmosphere, including abundant street markets, bars & clubs, vintage clothing shops and artistic graffiti, it retains its connection to the Indian subcontinent via its many curry restaurants, Bengali supermarkets, and even a mosque (masjid).

The first Bangladeshi immigrants started settling in this area in large numbers in the 1970s. There are a estimates of up to half a million British Bangladeshis in England today, with a large portion of those taking up residence around Brick Lane. The street was made famous by Monica Ali’s popular 2003 novel ‘Brick Lane’, which was later turned into a film with the same name.

Especially at night time it is worth visiting Brick Lane’s curry street as the neon signs glow brighter than any other area east of Piccadilly Circus. You will also be ‘greeted’ by many restaurant workers hoping to rope you into their own place with an offer of free naan bread, a glass of wine, or a discount of some kind. This is the only way they are able to compete with all the other curry places on the lane. Some of them can get quite busy come suppertime and there are plenty of options, so be sure to choose carefully before you go in. 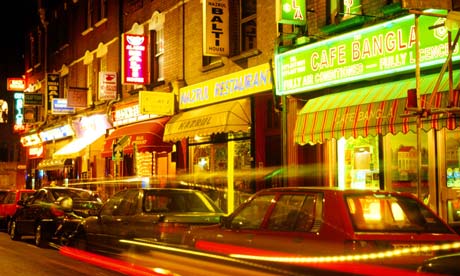 The Brick Lane Great Mosque (or ‘Jamme Masjid’) is located in an interesting old building about half-way down the street. It started out as a Protestant Chapel in the 1700s, appropriately made of brick, and has since been transformed into a Jewish synagogue before it was eventually converted into the mosque that it is today. The Jamme Masjid mainly serves Bangladeshi Muslim followers from around Brick Lane and Shoreditch.

Another place worth a visit on any tour of Brick Lane is an Indian-style sweet shop. One in particular you might like to try is called Rajmahal Sweets which serves excellent desserts in a range of colours and textures. The flavour of most of them is milky and sweet, some made with or without wheat. At the other end of Brick Lane, you will find a couple of famous 24-hour bagel cafes started by Jewish immigrants which are popular with locals as they are cheap and always open. They both claim to be the original one. A must-try is the salt beef bagel (or ‘beigel’ as they are called here).

An American at Kumbh Mela

Postcards from a Holiday in North Korea